On 27 October, ANACOM - Autoridade Nacional de Comunicações began distributing its Guia TDT (DTT Guide) to all Portuguese homes.  The 12-page guide gives concise and clear explanations of all the steps people need to take to make the change over to digital television.  In total, six million copies of the guide will be sent out.

Distribution of this guide constitutes a further component of ANACOM’s national information campaign on the switch-off of analogue television in Portugal.

Given the number of copies to be sent out, the large-scale postage operation means that distribution across mainland Portugal and in the Autonomous Regions of Azores and Madeira will occur over four days.

To date, the analogue television signal has been switched off in three pilot zones: Alenquer, Cacém and Nazaré/Alcobaça.  In all cases the pilots were successful and the number of people left temporarily without television was extremely small.  These pilot zones provided an opportunity to test the technical conditions and test the conditions of the market and of communications, demonstrating that the switchover to DTT can be accomplished without causing disruptions.

ANACOM has begun distribution of the Guide precisely to ensure that the switchover to DTT is concluded smoothly nationwide, bringing all Portuguese families the information they need to make the change in good time. 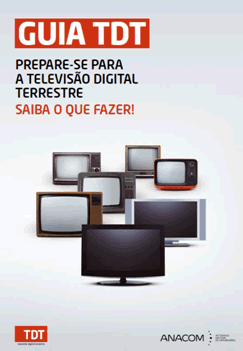