Market
An english version of this page will be made available soon.
You may wish to go to the english homepage. 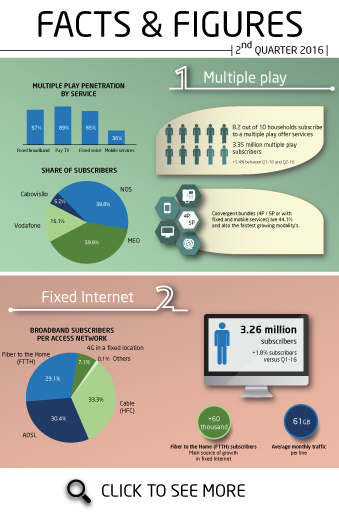 This information is copyrighted to ANACOM

Note 1: In the MTS, active mobile stations were considered.
Note 2: The EU average refers to values reported for December 2014, in the case of FTS, July 2015 in the case of STV, bundles, FBB and MBB, October 2015 in the case of MTS.
Note 3: Portugal's EU ranking is determined based on available information from countries for the year being reported.  In the case of STV, most recent information was considered for each country. Croatia was included in the rankings in 2013.
Note 4: Use made of most recent estimates of population and private households following the 2011 Census. Data reference period: 31 December 2015.

Note: Up until 4Q2014, revenues derived from the mobile component of bundles sold by MEO were reported as revenues from Mobile Services. Currently, they are not yet accounted for the individualized revenues of the integrated Mobile Services bundles.
The variations reported in total and unit revenues (especially  quadruple/quintuple-play bundles and mobile services) partly reflect the change in accounting criteria applied to the revenues derived from bundles sold by MEO, following the merger that took place at the end of 2014.

Note (2): As from 2Q2016, separable FTS Revenues include “other revenues”. Following this alteration of criteria, the values reported this quarter for this indicator are not comparable with the values published in previous quarters.

Note 1: Shares of mobile voice subscribers calculated based on active mobile stations with actual use.
Note 2: MBB - Users of mobile broadband Internet access service
Note 3: On September 15, 2015, Altice announced that it had reached an agreement with the APAX France investment fund on the sale of its Portuguese operators, ONI and Cabovisão. The transaction will be subject to approval from the European Commission and from Portuguese authorities. On 12 October 2015, Autoridade de Concorrência (Portuguese Competition Authority) was notified of the acquisition of sole control of the companies Cabovisão-Televisão por Cabo, Winreason and Oni SGPS by Cabolink (a company controlled by Apax Partners Midmarket S.A. and by Apax France).