RIA 2019 - the Exchange Meeting of Portuguese Speaking Communications Authorities - took place in the Autonomous Region of Madeira between 6 and 8 May 2019, attended by the regulators from Cape Verde, Mozambique, Guinea Bissau and São Tomé and Príncipe, in addition to ANACOM, which was responsible for organizing this edition.

The Chairman of the Board of Directors of ANACOM, João Cadete de Matos, opened work on 6 May, reinforcing the role of RIA and the importance of cooperation. He underlined the advantageous exchange that has taken place over the years, challenges that are common to all these geographical areas, problems and difficulties that need to be solved and which are common, and where the sharing of knowledge and experience is of great importance.

The Chairman of ANACOM emphasized the importance of good coverage for telecommunications networks, especially the Internet, which is indispensable for all individuals and companies to communicate. Access to the Internet is an essential service, which is of particular relevance to islands and other remote regions, which, because they are more isolated, need better electronic communications even more. In fact, the RIA meetings had their origins in the particularities of such island regions.

However, as the problems and difficulties affecting the islands are common to other areas of national territory, the RIA’s experience can be streamlined and supported by a broader perspective regarding areas that have communication problems in any part of a territory, since there are areas in the countryside of a country with more problems than its islands.

Good communications are a goal for ANACOM, the Government, regional authorities and regional governments. Everyone recognises the importance of telecommunications and the fibre optic coverage of the country. In the islands, submarine cables are of paramount importance.

The sharing of suitable infrastructures was another of the topics mentioned and their importance for allowing the acceleration of the expansion of networks and reducing investment amounts. In this context, the Suitable Infrastructure Information System (Sistema de Informação de Infraestruturas Aptas - SIIA) was referred to, an electronic platform created by ANACOM that establishes a meeting point between those who have suitable infrastructure and those who need this to house their networks. The sharing of infrastructure was another of the topics addressed, which has taken on considerable important now given the movement towards 5G, as it will facilitate the implementation of such networks.

The Chairman of ANACOM also mentioned the fires which occurred in Portugal in 2017 and their impact on telecommunications infrastructures, with more than half a million people being deprived of services. In this context, he mentioned the activity of the working group coordinated by ANACOM that identified a set of measures to minimise the impact of this type of event and to reinforce the resilience of the networks.

Ema Chicoco, Chairperson of the Mozambican regulator (Communications Regulatory Authority - INCM-ARECOM) mentioned the importance of the exchange of material of a technical nature and stated that Mozambique is optimistic about this exchange. She highlighted the importance of spectrum management and monitoring and spoke of the monitoring system used in her country, which she described as very modern. She also mentioned the prospect of having a monitoring station in each of the country’s 10 provinces, which currently exist in only four. She also argued at the same time that the RIA should continue to favour a technical approach to distinguish itself from other organisations.

The Chairman of the multisectoral regulator for Cape Verde (Multisectoral Regulatory Agency for the Economy - Agência Reguladora Multissectorial da Economia - ARME), Isaías Barreto da Rosa, believes in obtaining synergies through exchange as a way of preparing to face challenges. He stated he wanted to understand better the context of this cooperation network and its potential, and how it could help solve common problems. He highlighted the fact that network resilience and connectivity are key issues for a country such as Cape Verde and gave the example of a few years ago when ships cut submarine fibre optic cables. He considered 5G another important topic and announced that Cape Verde will go ahead with pilot experiments, so it was interesting to share reflections on this theme.

Gibril Mané, President of the Guinea Bissau Regulator (National Regulatory Authority - Autoridade Reguladora Nacional - RNA), mentioned the importance of attending this meeting to get to know RIA better and obtain information on the contribution of tourism to the economy, which is an important part of RNA’s agenda. As regards spectrum monitoring, for the last four years this regulator has had a project to install a platform that has already been presented at the RIA and is in the process of creating a system of indicators to measure the quality of the service, and is still working on the transition to digital television. He said that the country has a deficit in terms of mobile network coverage.

António Lomba de Ceita, a member of the board of directors of São Tomé and Príncipe's General Regulatory Authority (Autoridade Geral de Regulação de São Tomé e Príncipe - AGER), shared with the other regulators the challenges they face, since it is a multisectoral regulator that has to carry out work to optimise resources and is carrying out a major reform in the electrical sector. He stated that regulation of the telecommunications sector is more advanced, but that the regulator is worried about the difficulties of growth experienced by the second operator. He referred to the good coverage of telecommunications networks and the need to ensure the transition process to digital television and to develop the postal sector, and it was important to follow the Portuguese experience in this area.

At the meeting, the regional delegate of ANACOM, José Nelson Melim, described the activity carried out by the Madeira delegation and the need to optimise resources to work in all areas, with emphasis on market supervision and spectrum monitoring. In this context, he presented Radiotask, a spectrum monitoring and control tool developed by ANACOM and aimed at measuring the quality of the coverage in smaller areas. He also spoke of another application developed by ANACOM, which will allow each person to monitor service quality through their own mobile phone.

RIA 2019 also discussed and identified the topics that should be given special attention in the near future, either because of their relevance to the countries represented at the meeting, if the prices of roaming calls between them are reduced, or because of their global importance, which is the case with cybersecurity.

Work continued with the various delegations accompanying the implementation of spectrum monitoring actions on the ground, using a mobile station.

Of note during RIA 2019 was the regulators' visit to the ANACOM delegation in Funchal, during which prizes were awarded to the winners of the competition “My favourite stamp”, promoted by ANACOM in the schools of the Autonomous Region of Madeira.

A meeting was also held with the Regional Government of Madeira, represented by its Vice-President Pedro Calado and the Deputy Regional Director, Patrícia Caires.

In addition to the members of the board of the various regulators, the delegations present at RIA 2019 included several other officials: Cesário Ferreira da Silva and Clode Sanhá from ARN; João Jorge, from ARECOM; from ANACOM, in addition to the Madeira delegation team (Renata Sousa, Rita Garcia, Sílvia Figueiredo and Victor Mendonça), Luís Anselmo, regional delegate of ANACOM in the Azores, Filipe Baptista, responsible for the area of cooperation, and Ilda Matos, press officer, were also present. 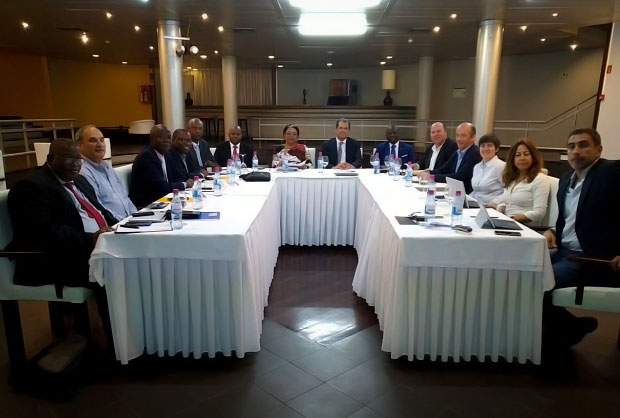 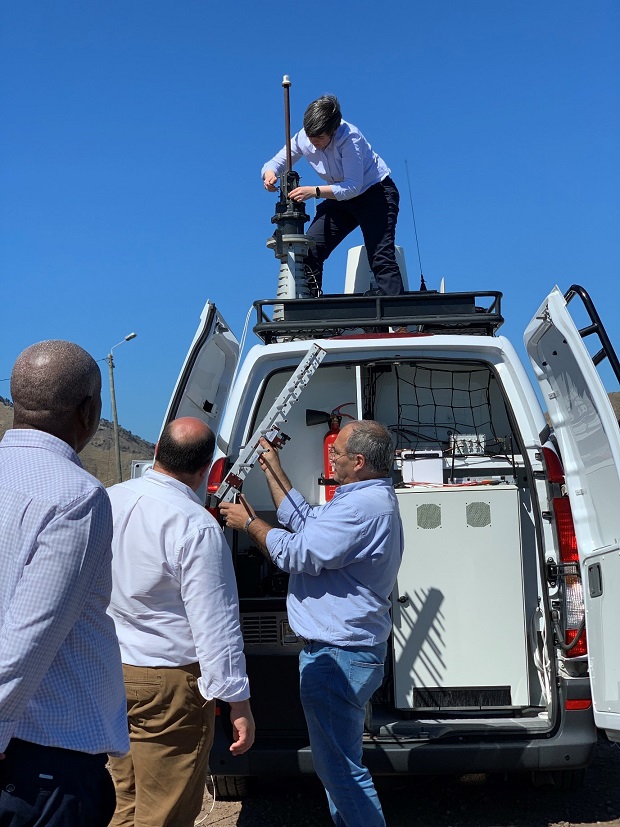 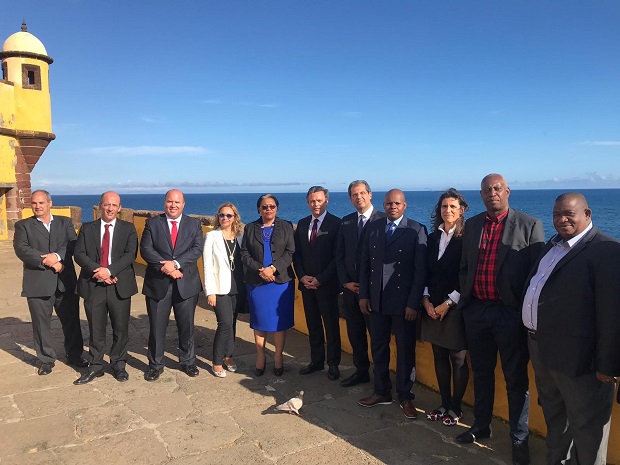 Participants at RIA had a meeting with the Vice-President of the Regional Government of Madeira, Pedro Calado (centre).