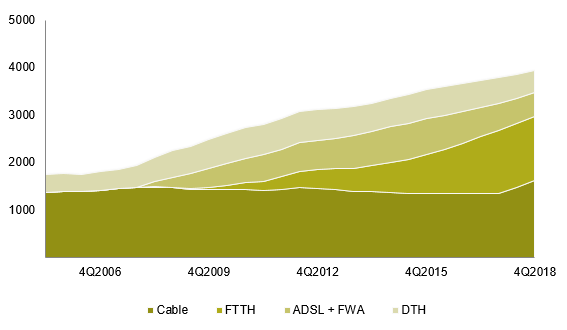 The percentage of homes with subscription TV signal distribution service with access to premium channels (15.8%) has been decreasing significantly. The lowest value since this type of information has been collected was recorded in the 3rd quarter of 2018 (14.2%).

Unit: %
Source: ANACOM based on microdata from the Marktest BTC, 4Q2009 to 4Q2018
Note: homes with pay TV (total); does not include non-responses

In 2018, postal traffic decreased by 5.9%, to reach 734 million objects. The reduction of total traffic was due to the reduction in traffic from letters, editorial mail and direct mail, which was partially compensated for by the increase of 10.2% shown in parcel traffic.

Total postal traffic in 2018 - by type of object 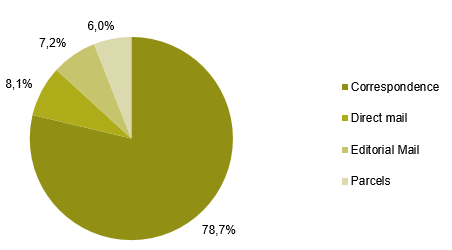 In 2018, around 82.6% of revenues corresponded to postal services understood as forming part of the universal service. 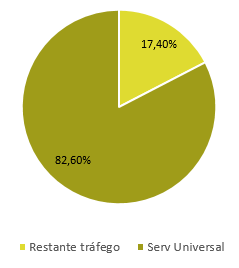 Trends in the number of fixed broadband accesses, per technology

It is worth noting the speed ranges defined in the “Digital Agenda for Europe” goals, where approximately 79.7% of users had accesses of at least 30 Mbps and 71.6% used access speeds equal to or greater than 100 Mbps.

Trends in the number of fixed broadband accesses, per download speed

In 2018, broadband Internet access traffic at a fixed location totalled 4.6 million TB, which represents a growth of 49% compared to the previous year. 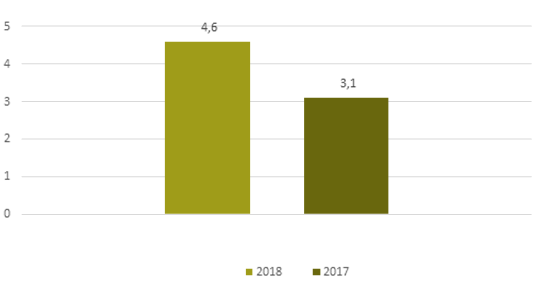 The number of mobile accesses authorised to use the service reached 17.5 million. Of these, 12.4 million (70.5% of the total) were actually used (excluding M2M). 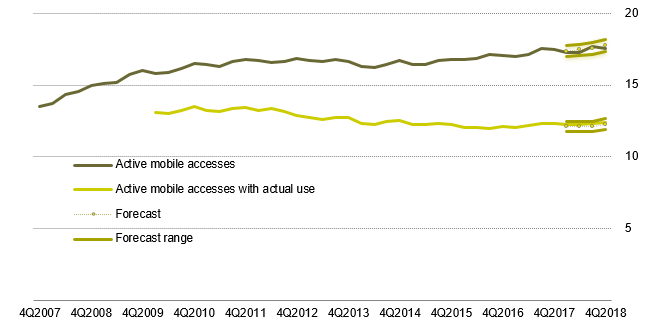 Actual users of the mobile Internet access service reached 7.6 million, 6.4% more than in the previous year. This is the highest figure recorded to date, but still well below the European average (27th position in the EU28 ranking in July 2018).

Evolution of the proportion of mobile broadband Internet service users

At the end of 2018, 44% of mobile accesses with actual use were associated with pre-paid plans, a reduction of 2.8 percentage points compared to the end of the previous year. As such, the downward trend in the weighting of pre-paid tariffs recorded since the start of 2013 was maintained. In contrast, the proportion of post-paid/hybrid tariffs rose.

Distribution of subscribers by type of tariff plan 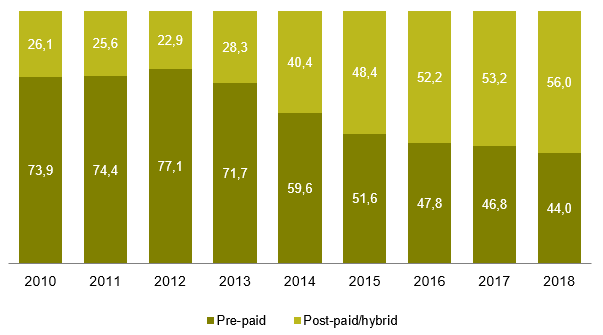 It is estimated that in 2018, the coverage of high-speed networks at a fixed location reached at least 81.2%, 5.4 percentage points more than the end of the previous year.

By the end of 2018, the number of residential customers with high-speed services at a fixed location rose to around 2.5 million, 10.9% more than that recorded in the previous year.

Residential customers of high-speed services at a fixed location 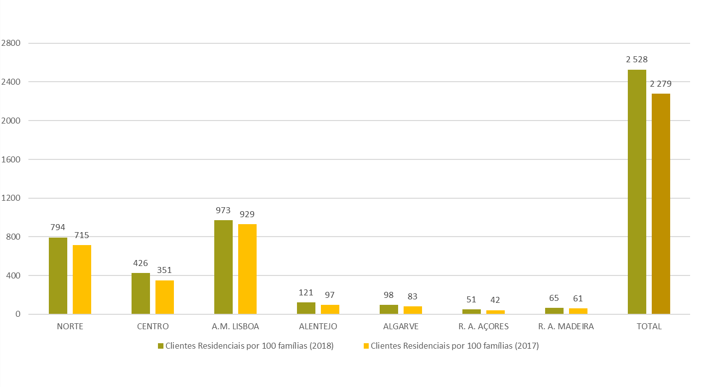 The number of subscribers to bundled offers reached 3.88 million at the end of 2018, a growth of 145 thousand customers, or 3.9% more than the values recorded in 2017. The value recorded is within the forecast range.

Trend in the number of bundled services subscribers and forecast range 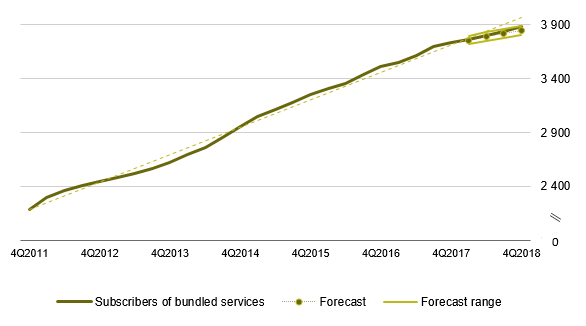 Distribution of the number of subscribers of bundled services by type of offer, 4Q2018 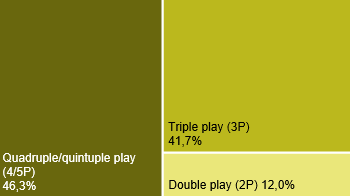 At the end of 2018, the number of direct access fixed telephone service customers reached 4 million, a value 2.3% higher than that recorded in the previous year, and slightly above the forecast range.

Households with FTS included in their bundle

Unit: %
Source: ANACOM, based on microdata from the Marktest BTC, 4Q2014 to 4Q2018
Note: Total homes with FTS (does not take into account non-responses).

Total traffic originating in the fixed network in minutes decreased by 9.4% in 2018. This decrease is explained by the reduction in fixed-fixed national traffic (-9.2% in number of minutes). This trend is due to the increase in the penetration of “4P/5P” bundles, which include mobile services with free calls to all networks and, also, the growing penetration of new forms of communication supported on the Internet.

Traffic originating in the fixed network (minutes) and forecast range 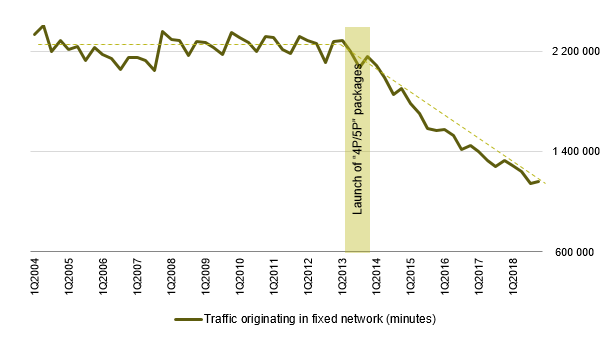