The ANACOM conference discussing and debating the challenges of the digital society was held on 29 May, in the auditorium of the Portuguese Communications Foundation, in Lisbon.

The Deputy Secretary of State and for Communications, Alberto Souto de Miranda, opened the event by highlighting some of the risks and challenges associated with digital evolution, namely digital asymmetry, the substitutability of people by technology and the homogeneous coverage of the country with optical fibre.

Daniel Innerarity, philosopher and professor of political philosophy, considered one of the 25 greatest thinkers in the world by “Le Nouvel Observateur” magazine, and Gustavo Cardoso, professor of communication sciences and director of OberCom - the Communication Observatory, participated in the session “The challenges of the Digital Society”. The debate was moderated by Carlos Magno, journalist and university professor, who chaired the Regulatory Entity for Social Communication (ERC) between 2011 and 2017.

In his speech, Daniel Innerarity "tackled a number of issues", including the crisis of institutions, given that people want direct access to everything (health, information, politics...), the “uberisation” of the world (that is, using service platforms, we have direct access to what we want), the crisis of creativity and the need to learn to balance creativity and control.

Daniel Innerarity also introduced into the debate the essential importance of self-government, or self-regulation. Government has to be understood as a self-government, which is a fundamental democratic principle. It is essential for government and regulators to establish procedures for regulators to self-regulate, providing information, incentives, flexibility and prestige in order to promote guided self-organisation. The philosopher added that regulators should follow the principle of sumo (a Japanese sport) - harnessing the strength of the other actor which, along with my own, can work in my favour.

In self-regulation, therefore, there is an infrastructural conditioning of decisions in which there is a government of context, where the decisions of market agents are conditioned to voluntarily do what the regulator seeks.

Gustavo Cardoso recalled that information has always been present in society, but what has changed is the network through which the information is transmitted, and he warned of the importance of national and cultural differences in the use of digital media, namely social networks. In the age of communication and networks it is necessary to realise that each country has its own reality and that there are different ways of looking within the various cultures.

He also introduced the concept of “remix” in communication. Whoever creates, “remixes” (alters what already exists) and recreates. The media are shaped according to what each of us wants, in a logic of self-government. “Beta, update and remixable” is the norm nowadays.

He concluded his presentation by stating that the mark of our historical everyday life is that we are individuals in a network, and this is a fundamental cultural trait.

The session was closed by the Chairman of ANACOM, João Cadete de Matos, who stated that the purpose of this conference had been fulfilled, namely to reflect on the changes in society with a significant impact on people's lives and to counter the formulaic view we have of regulatory and legal issues related to the digital world and to regulatory activity.

ANACOM's activity also focuses on mediation between the recipients of the action (people) and those who provide the services (regulated companies), in a logic of self-regulation and improvement of the quality of service. In this regard, he recalled the agreement of operators on wap billing and their decision on net neutrality.

The commemoration of ANACOM's 30th anniversary. He expressed his gratitude, also on behalf of the Board of Directors of ANACOM, both in its current composition and in previous periods (emphasising the presence of José Amado da Silva and Pedro Duarte Neves, former chairs), for the work, competence and dedication of this Authority’s employees over these 30 years. This appreciation was personified in honouring Luís Garcia Pereira, who has worked with ANACOM since its inception, during two periods, and that, starting in June 2019, he will retire. The Assistant Secretary of State and Communications, Alberto Souto de Miranda, during his speech. 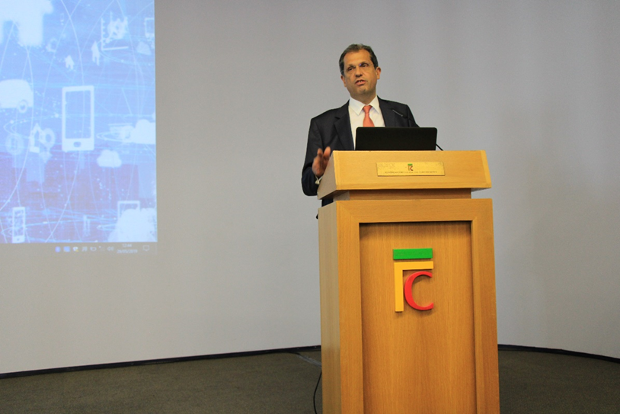 João Cadete de Matos, Chairman of ANACOM, at the conclusion of the 2019 ANACOM Conference: The challenges of the Digital Society.