ANACOM discloses a review of telecommunications prices in Portugal in the form of 9 questions:

Between 2009 and 2019, telecommunications prices in Portugal increased by 7.6%, while in the European Union they fell by 9.9%. The different narrowed in 2019 due to the entry into force of the European Regulation that reduced the prices of intra-EU phone calls (EU Regulation 2018/1971). 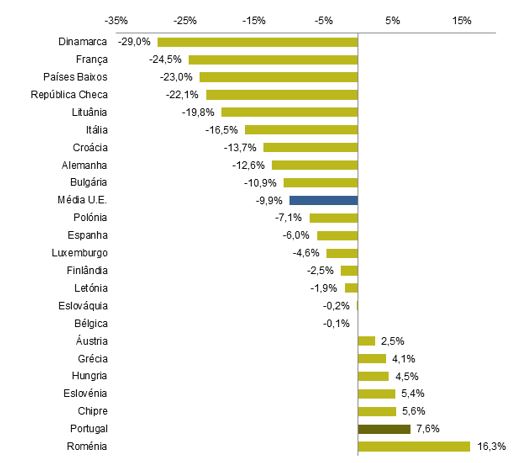 Unit: %
Source: ANACOM, based on EUROSTAT data.
Note: Information not available for the United Kingdom, Ireland, Malta, Sweden and Estonia.

According to international comparative studies of telecommunications prices promoted by independent institutions (European Commission, OECD, ITU), the prices of mobile services, individualised Internet services and service packages for lower levels of use are above the average of the countries that were considered.

For example, according to the more recent price comparison studies promoted by the European Commission in 2018 and 2019:

The Figure below summarises the findings of the last European Commission study on mobile broadband prices.

It should be noted in particular that in the most recent comparison of prices of packages promoted by the European Commission the relative position of Portugal has improved in relation to previous years. This outcome was due to the “customised” offers that the larger providers released between mid-2018 and the end of the 3rd quarter of 2019. Some of these offers have been discontinued in the meantime.

It should also be highlighted that the main electronic communications providers (MEO, NOS and Vodafone) increased the monthly charges and other pricing elements of residential telecommunications services in Portugal between 2009 and 2016, normally at the beginning of each year. During this period, telecommunications prices grew by 12.4%.

The consumers experienced these increases, especially when seeking to renew their contract, at the end of the loyalty period, and were unable to keep the previously contracted conditions at the original price.

These price increases of residential services can occur simultaneously with a reduction of unit revenue due, for example, to the reduction of premium channels, change of provider, downgrade to a cheaper offer, upgrade to a cheaper convergence offer, etc. Indeed, during the period under review this type of change of consumption pattern did in fact take place.

Annex presents various numerical examples demonstrating this. It is fully demonstrated that not only is it possible for prices and total revenues and unit revenues to have a divergent evolution, as it is inappropriate – and could be misleading – to criticise the results of a price index based on the evolution of unit revenues, the value of average bills or €/RGU (revenue generating unit).

The changes of consumption patterns observed in Portugal, over the last few years, contributed to reductions of revenues despite the price increases. This fact is confirmed both by the statistical data collected by ANACOM (e.g. evolution of revenues, evolution of subscription to premium channels, convergence packages, changes to operator with significantly cheaper offers) and by the actual providers in their Annual Reports, as illustrated in detail in the disclosed review.

In addition to this, the total revenues and unit revenues of the sector include all the providers and all customers segments (residential and non-residential). Thus, it is possible that, for example, certain providers or segments (for example, business customers) are declining and causing a reduction of total revenues while the prices charged to another customer segment (for example, residential customers) are increasing. According to the Annual Reports of the providers, the revenues of the non-residential segment fell significantly, primarily due to the economic circumstances (bankruptcies, cost-cutting, enhanced competition, etc.).

A further situation that should be considered in the analysis of price variations involves the fact that, at the end of a loyalty period, the consumers are faced with an increase of the monthly charge if they do not wish to be bound to a new loyalty commitment or, alternatively, there is a new loyalty period with a monthly charge that is higher than the original monthly charge, but lower than the “non-loyalty” price. In these circumstances, an upgrade of the package or inclusion in a package of additional services that may not be used by the consumer is sometimes proposed. In other words, a price increase occurs.

On the other hand, it needs to be taken into account that, in other European Union countries, a similar evolution is taking place in terms of “quality” and “quantity” and that, on average, in these countries, prices have fallen over the last few years.